It has been almost 10 years since Wine Aromas Inc. has requested Le Nez du Whisky. So it is with great pleasure that I make this announcement. The long-anticipated, much awaited Le Nez du Whisky is finally, finally, scheduled for release in October 2013! 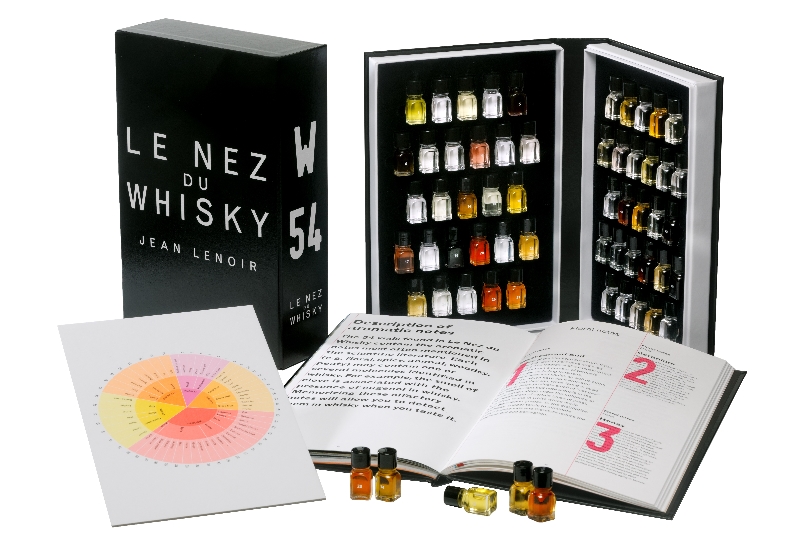 The Instructional Book talks about the olfactory memory by understanding how your brain processes scents and smells, you will learn how to improve your ability to recognize and identify whisky/whiskey aromas. It discusses how whisky is made and provides information on the world’s whisky regions. In its pages you’ll find a new classification of whisky aromas, an aroma wheel, a detailed list of whiskies/whiskeys classified by aroma, and a description of the origin of whisky/whiskey aromas.

The Le Nez du Whisky is a must-have olfactory memory training tool for whisky/whiskey lovers, just as Le Nez Du Vin and Le Nez du Café are must-have tools for wine and coffee enthusiasts, respectively. As the Le Nez du Whisky Instructional Book will tell you, your ability to recognize scents depends on your scent memory. To put it simply, if your brain has no name for a particular scent (that is to say, if your brain has no memory of a particular scent), then even if your nose smells or “senses” it, you still won’t be able to recognize or identify it.

The Le Nez du Whisky works by telling you the names of the most common whisky/whiskey aromas AND teaching you what these aromas smell like. The detailed aroma-by-whiskies classification (over 1200 whiskies/whiskeys listed) also provides a viable starting point in training yourself to recognize the aromas found in specific whiskies/whiskeys.

This is definitely a fun, educational way to master the language of whisky/whiskey and a most original gift idea for your favorite whisky lovers. For more information on Le Nez du Whisky or any of the Le Nez collections, please visit WineAromas.com.

Whisky Tasting Is Memory and Technique

Knowing what aromas to look out for is just one part of the whisky/whiskey tasting experience. The other part is technique.

For example, you probably know that whisky/whiskey has a higher volatility than wine due to its higher ABV (alcohol by volume), so unlike wine aromas some whisky aromas are not so easily perceived. In whisky tasting, therefore, watering down whisky is necessary to decrease its ABV, reduce its volatility and increase its openness or unmask its hidden aromas. But “watering down whisky” is not dumping just any amount of water into your snifter. When tasting whisky, water should be of a certain quality, water added by drops, dilution done gradually, and changes in detectible aromas assessed systematically.

To learn the method and technique of “tasting” whisky/whiskey, I highly recommend reading the book I wrote, “Discovering and Mastering Single Malt Scotch Whisky.” Learn more about this book by visiting http://www.winearomas.com/Single_Malt_Scotch.html.

“Discovering and Mastering Single Malt Scotch Whisky” will immerse you into the world of Single Malt Scotch Whiskies like never before. More importantly, it contains (among other useful things) a step-by-step guide in tasting whisky. Follow that guide when tasting whiskies and you’ll find more meaning in what you’ve learned from the Le Nez du Whisky.